You are invited to a screening of an Oscar longlisted Ukrainian feature documentary ‘Ukrainian Sheriffs’. Film director Roman Bondarchuk and producer Darya Averchenko will present the film and will be available for Q&A after the screening.  It is a very special film that is currently getting the best reviews in top American film media.

College of Film and the Moving Image

The screening is co-sponsored by College of Film and the Moving Image with, Office of the Dean of Arts and Humanities, Department of Russian and Eastern European Studies, The Allbritton Center for the Study of Public Life, The Department of Government, and Wesleyan’s Center for the Arts.

“Ukrainian Sheriffs” got the Special Jury Prize in the main competition of IDFA – 2015 (A+). The International documentary film festival in Amsterdam well-known as central documentary world forum and called ‘documentary Cannes’.  The festival record of the movie is great: it was screened at more than 40 festivals from South Korea to Toronto and continues to travel worldwide. TV-premier was on ZDF/ARTE, on Saturday prime-time, in March 2016. ARTE has coverage of 120,000,000 viewers in total.

Ukrainian Sheriffs is a real life story about two local sheriffs and the villagers of a remote village near Crimea, Stara Zburievka. Following the sheriffs on their everyday duties, the story gives us a look beyond the war and the ongoing political events inside the everyday life of the villagers, foregrounding the tension between personal survival and political justice. What was meant to be a film about a few people from the Ukrainian countryside and their everyday struggles, portrays the faith of a whole nation during the turning period in its history.

Following this links you’ll find news about the movie and interview with film-director Roman Bondarchuk:

We write to invite you to cast your vote for the best photos featured in our “Wes in the World” exhibit, currently on display in our Center for Global Studies (Fisk Hall).  This exhibit consists of photographs submitted by Wesleyan students who studied abroad this past year.

Prizes will be announced Jan 27, 4:30-6:00pm, at our awards ceremony.  By voting, you will secure for yourself a special invitation to the ceremony, and a chance to meet award-winning photographers!

We encourage you to visit the Center for Global Studies, in Fisk Hall, to see the photographs on display.  In any case, by clicking on the link below, you will be able to view digital versions of these works of student art and cast your ballot.

Don’t delay, vote today! We look forward to receiving your vote and to seeing you on January 27, if not before. 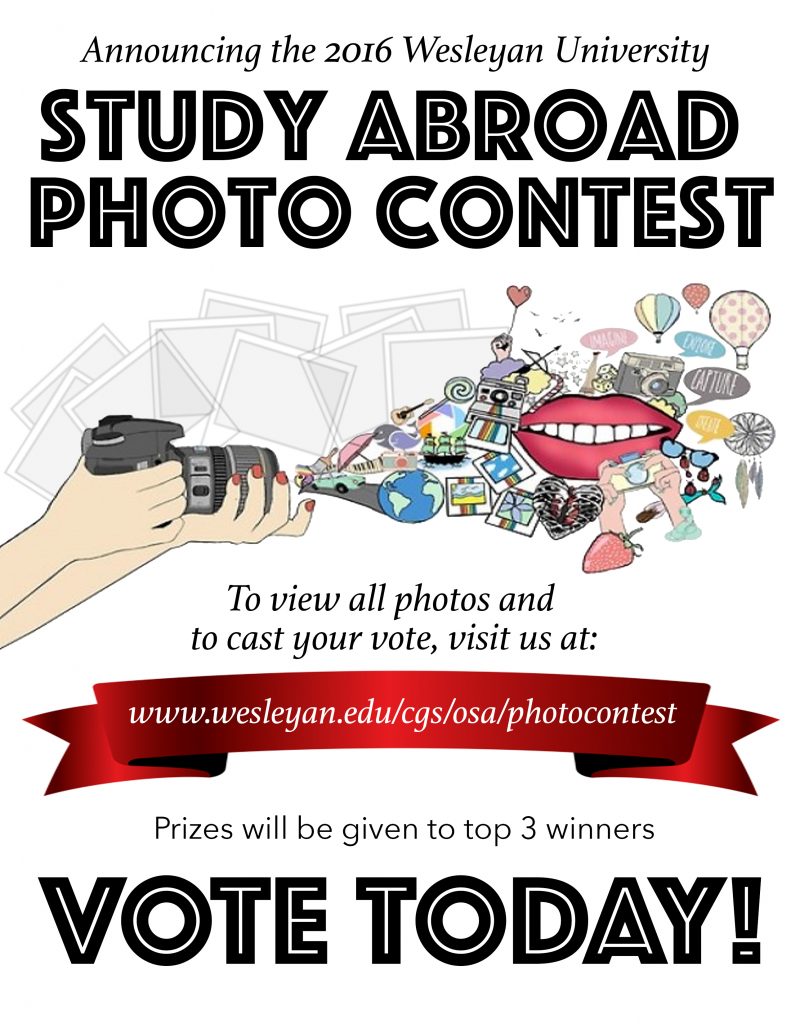 Wesleyan is implementing a new teaching evaluation form this fall.  The majority of classes will use the new teaching evaluation form, with new questions.  However, a small number of classes will continue to use the old form for a few more terms, so some students will complete a different form for certain classes.  There will be one landing page for all student course evaluations, with a link to the correct form for each course.