“Islands” is a play celebrating the arts as a means of resistance to colonialism, slavery, and injustice.  The story begins with two seventeenth century European superpowers trading Manhattan for an East Indies spice island, without the consent of their inhabitants, and moves through the history of other islands of oppression from Malcolm X in solitary confinement to Nelson Mandela’s Robben Island to Aung San Suu Kyi in Myanmar to contemporary Puerto Rico to African Immigrants in refugee camps on Lampedusa. Featuring Indonesian dance master Novirela Minang Sari who will teach her island’s techniques of body percussion to cast members as they participate in devising the script.

Directed by Professor Ron Jenkins, this production will be staged in the CFA Theater, April 2017.

Students will be given texts to read at the auditions, or may bring their own prepared one minute monologue.  Students may choose to sign or act or dance, or do all three.

Interested students can sign up in the Theater Studios lobby on the call board beginning Wednesday 8/31. Any questions? Email dalger@wesleyan.edu

Cast members will have the option of receiving course credit

Wes Out-Loud: Stories of Place is a site-specific auditory performance piece that is conceived and created for the Wesleyan campus through collaboration between theater students and Professor Marcela Oteíza. Wes Out-Loud invites you to experience Wesleyan as a scenographic space by inserting new narratives into everyday sites. Through the juxtaposition of place and stories, we hope to bring forward the richness and diversity of the students of our campus, to promote inclusiveness, and to give space to voices that are usually not heard.

This production is an invitation to re-think and re-engage with our campus: Considering the institution and its physical context; location and architecture; its history; institutional and individual narratives; and how they affect our daily lives and our social interactions.

We will be creating a journey through specific places of our campus, into which we will intervene new narratives (students stories). Through which, we will be able to bring to light the richness of the students of this campus and, thereby, promote inclusiveness and provide space to voices that are not usually heard.

The process for this piece will be through collaboration between a group of nine to twelve students (who will register for a full credit of THEA: Performance Practice) and the project director (Prof. Marcela Oteíza). The students participating in the course will decide upon specific places and modes of interventions through group discussions, rehearsals, and aesthetic approach. The students will perform and/or create each intervention.

If you would like to participate in Wes Out-Loud: Stories of Place, as a collaborator, please submit your story as the mode of audition (see attached form). If selected, you will add THEA Performance Practice under Prof. Oteíza during Drop/add in the spring.

There are also other ways to participate, such as Production Assistant, running crew, ASM, and so forth. If you are interested  please contact Rebecca Foster, Theater Department technical director at rfoster01@wesleyan.edu.

Five Wesleyan Theater Department alumni talk about their work and careers in theater after Wesleyan. They include:

Roberta Pereira ’03 is the Producing Director of The Playwrights Realm, an off-Broadway theater company that develops and produces new plays by early-career playwrights. Before joining The Realm, she worked with Bisno Productions on shows such as A Red Orchid Theater’s off-Broadway premiere of The Opponent; the Tony Award-nominated play Mothers and Sons by Terrence McNally, starring Tyne Daly; the revival of the beloved musical Annie; the Olivier Award-winning revival of Stephen Sondheim’s Merrily We Roll Along in the West End; the Broadway premiere of Grace, starring Paul Rudd, Michael Shannon, and Ed Asner; and the Tony Award-winning smash hit War Horse (Broadway, Toronto, and U.S. tour). Previously, Ms. Pereira was an Associate Producer at Anne Bogart’s SITI Company, Executive Producer of Yale Summer Cabaret in New Haven, and she produced all the auxiliary events for the 2006 Dublin International Theatre Festival. In 2011, Ms. Pereira co-founded Dress Circle Publishing, a boutique publisher specializing in books about Broadway and by Broadway authors. Bestselling titles include Ruby Preston’s Broadway Trilogy, Jennifer Ashley Tepper’s The Untold Stories of Broadway, and Seth Rudetsky’s Broadway Diaries. A graduate of the Yale School of Drama’s Theater Management program, Ms. Pereira is originally from Brazil, and currently lives in New York City.

Michael Rau ’05, Artistic Director and Co-Founder of Wolf 359, is a director specializing in new plays, re-imagined classics, and operas. He has been working internationally in Germany, the United Kingdom, Ireland, Canada, and Greece; and has created work in New York City at Performance Space S122, The Culture Project, HERE Arts Center, Ars Nova, The Bushwick Starr, and Dixon Place.

Rachel Silverman ’09 is the Artistic Producing Associate at New York Theatre Workshop, where she has worked in many capacities since the fall of 2009. At NYTW, Rachel coordinates all workshop programming and artist development activities including a weekly Monday @ 3 reading series, summer residencies at Adelphi University and Dartmouth College and NYTW’s 2050 Fellowship for emerging playwrights and directors. In addition to her work with NYTW, Rachel served as festival producer for PRELUDENYC in 2012 and 2013 and has directed and curated for TinyRhino. Other producing credits include UglyRhino’s site specific What it Means to Disappear Here and 13P’s OBIE Award-winning A Map of Virtue. Rachel served as the Associate Producer of 13P for its final years until implosion and is a proud UglyRhino Associate Artist. BA: Wesleyan University, Theater and Sociology.

Emmie Finckel ’14, a New York-based scenic and properties designer, is currently the Communications Associate at David Korins Design, and has collaborated with Woodshed Collective, The Assembly, and Trusty Sidekick theater companies. The panel will be moderated by Associate Professor of Theater Cláudia Tatinge Nascimento.  An Outside the Box Theater Series event presented by the Theater Department and the Center for the Arts.

Audition Notice: Open to all Wesleyan Students and Community

Don’t miss the opportunity to be part of the Theater and Music departments’ production of In The Heights since it rocked the Broadway world in 2008. In The Heights started right here on campus, in a Second Stage production at the Patricelli ‘92 Theater!

Sign up for an audition on the call board in the Theater Department foyer:

¯Piano accompanist available on Wednesday 9/3 from 5:30-7:30pm to practice one song, one time through per student auditoner. Email Aileen Lambert at ajlambert@wesleyan.edu for location and to reserve a spot. ¯Vocal Auditions to be held in the CFA Theater and/or Theater Studio (TST 001). Dance Auditions to be held in Fayerweather 106/108. ¯For audition instructions, character list, sides/vocal parts: www.wesleyan.edu/theater, click on side bar link.

Pit Orchestra Auditions are being held for the following positions: 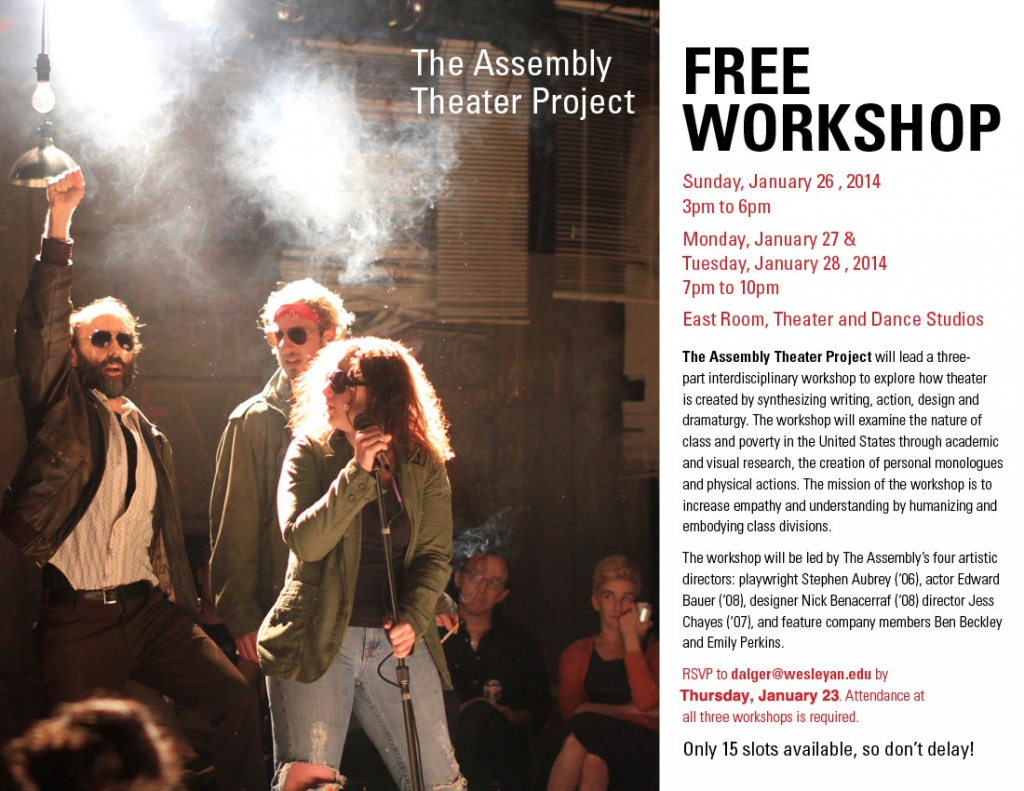